I just released a new live performance video the other day of me playing drums along with a song I made in Milkytracker. This is not the first video like this I’ve made, in fact I now have 11 or so videos of my playing along to chip trackers with live drums.

In addition to that, I’ve done several other types of performances on YouTube over the years, and have been adding them to this playlist above over time. I thought I would post it here again since it has recently been updated.

Get your music on all the streaming services for no charge up front: https://routenote.com/referral/2f72830b

I’m incredibly excited to be playing this festival that’s happening this weekend in Bushwick/Brooklyn, NYC!

11AM – 3PM
Gallery hours
Family friendly
Free to all!

As time proceeds through the modern age, past once futuristic milestones like the turn of the millennium, and dates of apocalyptic prophecy, we look back on the years that have passed and wonder where they leave us. Neither shiny, idyllic utopias nor grim post-collapses have truly materialized, so we wonder now what future we have left to expect. What tale of tomorrow is left to be told by a world that should already be there?

Existing works of media, common purveyors of what may arrive next, are themselves couched in their own respective timeframes. Due to specific technological tools, or in-vogue stylistic techniques, most creative works telegraph the era in which they were made, even when depicting a hypothetical future. These means and methodologies were typically discarded when the next big thing came around (arguably, before their potential could be fully explored), further entrenching the identifiability of when something was produced.

More recently, this trend has started to reverse. The rapid advancement of easily available tools, along with anachronism itself becoming a motif, has lead to imitations of the past becoming common-place. This, combined with the Internet’s ability to preserve, catalog, and analyze our memories, has led to a sort of temporal compression of culture. The content of creative works has begun to disassociate from the context in which they were originally formed.

Rather than fight against this phenomenon, it is time to embrace it. Treating the past as off-limits makes little sense, as it has begun to act not just as inspiration, but more like its own type of material. By combining, retooling, and synthesizing these elements, a better understanding of time may arise.

We believe that the retro-future is still ours to create.” 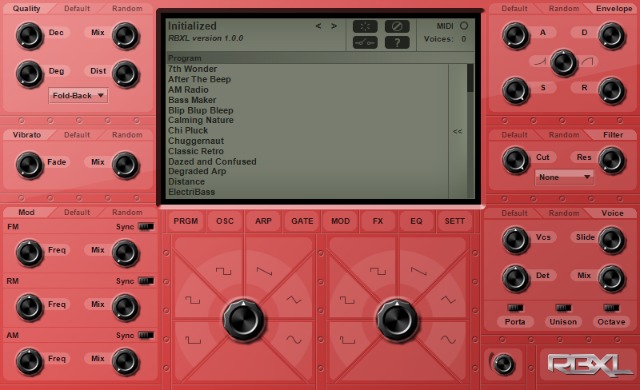 Sound-Base Audio has introduced RBXL, which they say is the big brother of Retro Boy. They describe RBXL as a subtractive chiptune VST plug-in for Windows 32Bit systems. A spokesperson told us, “This synth can create sounds from sick dubstep wobbles, to nostalgic trance arppeggio’s, to retro 8Bit sounds.” If you’re familiar with the world of Game Boy modding and music, then the name Joe Heaton should be known to you. This UK-based tech genius has been featured on the site in the past – both as an interview subject and to offer sagely advise to prospective modders – and he’s back with his latest amazing creation.

Heaton has created the ultimate mod by retro-fitting a Bluetooth module to a trusty Game Boy console, allowing it to pair with external Bluetooth speakers for a fuller, richer sound.

In Heaton’s own words:

For this mod I took a cheap Bluetooth transmitter from eBay, took it apart, hacked the hardware to run on my Game Boy and squeezed it all inside the console’s shell. Operation of the Bluetooth module is all done via the Game Boy’s select button.

As you can see in the video below, the mod is so well executed that you’d be forgiven for thinking that you’d somehow stepped into an alternative reality where Nintendo is still making Game Boy systems and is slowly upgrading them with modern features.

In Heaton’s case, the mod means he can really show off his chiptune creations – composed under the name Joe Bleeps – as well as gain some extra volume when playing classic Game Boy titles.

Stumbled across this awesome 8 bit / chiptune loop pack on freesound.org that was released under the creative commons attribution license. I haven’t gone through all of these yet, but I’ve listened to many of them. There’s all types of cool blips and beeps, rhythmic shots, hits and pulses. Definitely sounds like a useful addition to a loop collection.

Download above or if there’s an issue with that link, use my mirror here http://www.4shared.com/zip/GNi5isFrba/12786__looppacks__8bit-loop-pa.html